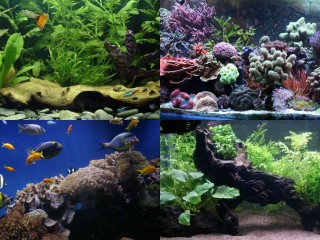 There are three types of water systems that you can choose from: freshwater, saltwater and brackish.

Within these main categories there are different environments of habitat and temperature.

Each of these systems has its own unique appeal, but some are trickier than others to maintain.

Apart from the difficultly factor there are other considerations such as cost, availability and stocking levels that you must also consider.

Freshwater is the most popular environment for aquariums and this if for a number of very good reasons:

At first sight this would appear to be the best setup for a beginner, as there is one less piece of equipment to deal with, namely a heater.

This is not actually the case, as there are a few drawbacks that you should be aware of:

A tropical freshwater aquarium is the ideal environment for a beginner. Even if you want to keep a tropical marine aquarium it is recommmended that you start with a freshwater setup. You can learn the basics and any mistakes that you make will not be as expensive as with a marine environment.

Here are a few good reasons to start with a tropical freshwater aquarium:

A tropical marine tank can look truly stunning, but as is normally the case this comes with cost. Marine systems are harder to maintain than freshwater, for a variety of reasons:

Virtually all the marine fish on sale are for tropical aquariums, and there are some very beautiful species available. Before you embark on keeping tropical marine fish there are a few points that you should be aware of

Reef aquariums are a real eye catcher and consist of invertebrates and organisms growing on live rock. In fact reef tanks can actually contain no fish at all!

Reef tanks are not recommended for beginners as they are expensive to setup and require very exact conditions.

Many beginners are attracted to the idea of coldwater marine tank, thinking that it will be less expensive and easier to maintain than tropical, unfortunately this is not the case.

There is one major reason for this, which is heat! Most coldwater marine animals will die if too hot, so a cooling system needs to be in place.

These are very expensive and will easily cost more than the rest of your equipment combined.

It is possible to create your own cooling system, which is beyond the scope of this site. Apart from the technical aspect these tend to be be very noisy. Apart from the major problem of heat there are a few smaller ones.

Brackish is the least popular of the three water types. The water itself lies between freshwater and marine. This normally occurs in nature when fresh water meets sea water normally in estuaries

The range of fish available is much less than either freshwater or marine, as is the choice of plants.

However, there are some interesting species available such as puffer fish and archer fish.