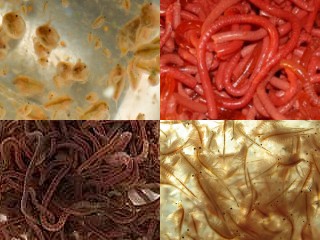 Apart from dried flakes and pellets another option for feeding fish is to use live food.

You will often see these in clear bags on the shop's counter, or in tanks ready to be packaged.

The list beneath features the most common types and their benefits.

Live bloodworms are a popular live food enjoyed by nearly all tropical and coldwater aquarium fish.

Bloodworms are highly nutritious and make a great supplement to your fishes normal diet. They can also act as a stimulant for spawning fish.

Live Brine Shrimp are a very nutritious food and are appreciated by both marine and freshwater fish, which makes them a good all-round live food.

As you have probably guessed from the name these are bred in salt water.

If you feed them regularly to your freshwater fish you should rinse them in a net to prevent the build up of salt in the tank.

Daphnia are a great choice of live food, for a number of reasons.

Firstly, they are nutritious and make a great complementary food.

Secondly, they will remain alive in the aquarium until they are eaten.

Thirdly, as they are filter feeders they will be cleaning your tanks water, until they are eaten!

Tubifex worms are another choice of live food for freshwater aquarium fish and they can be used to entice picky eaters who refuse other forms of food.

Tubifex worms are also a good source of protein so are often used to condition fish before breeding.

As the worms are bred in sludge water you should wash them prior to adding to your tank.